OK, picking things up where we left off, the text turns to the spells available to the magic-using PCs. In keeping with the S&S feel (as opposed to "high fantasy/magic") spell levels cap at 6th (unlike 9th in many flavors of D&D). There are four lists –White, Black, Grey, and Elementalist– followed by the alphabetical descriptions and stats for each spell.

Many of the spells are your standard fare (Detect Evil, Charm Person, Web, etc.). But there are several new spells that really help evoke the system and setting's tone. Spells such as Call the Kindly Ones or Cauldron of Blood.

Leaving the character section behind, we move into the nuts & bolts of the game. Most of this is pretty typical for your OSR class-and-level fantasy games. A few interesting things to note include that XP is not gained from treasure in this game. The is to reflect adventurers being hungrier for plunder even at higher levels. Also, it shifts the emphasis to defeating foes and completing quests.

As mentioned previously, characters have three new traits in C&T: Luck, Skill, and Sanity. Rules for their use and effects are presented here. I particularly liked the use of Luck as sort of a limited saving throw mechanic where you deplete the pool as you use it.

Skill is task resolution mechanic that's reflects general competence rather than specific training. A character's chance for success increases with level and different classes may get bonuses for certain tasks (thieves with stealth, barbarians with tracking, etc.). CKs (Crypt Keepers) are encouraged to apply circumstantial modifiers as they see fit and not to supplant roleplaying or problem solving with simple die rolls (a very old-school concept and well worth the brief mention it gets).

Sanity is included with simple Wisdom-base rules and some advice for when –and when not– to use it. While the game is not "Fantasy Cthulhu," the weird, eldritch horror aspect certainly needs addressing.

There are some fun little rules for companions and henchman. Companions are more loyal and fleshed out than henchman, but there are tables to add some flavor to those hirelings, too.

Combat is fairly straightforward, but it's worth noting that the sequence emphasizes that spells are declared before initiative is rolled. Other games are written this way too, but –given the nature of magic in the game– its an important balancing point to be able to interrupt a spell.

Damage and Death is a little different than most classic fantasy games. In C&T, hit points are the superficial damage and fatigue that occurs before real injury or wounds occur. The "draught of ‘strong drink’" rule that lets booze restore 1d4 hit points is fun.


-Conan, "The Phoenix on the Sword" 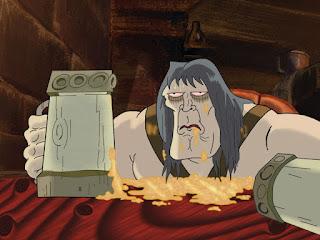 Once HP are gone, wounds apply to CON. Further, the game stresses the idea that PCs are special people. Most foes don't get to test luck or dip into CON. Once a regular shmoe's hit points are gone, he's dead. There are also optional rules for things like permanent injuries and the like.

The other two subjects of note in this section are Corruption and The Summons of Evil.

Corruption is the mechanic to address what happens when a sorcerer uses black magic too much. The summons of evil is the white magic parallel. In effect, the energy from white magic attracts notice from nasties. This reinforces that magic is dangerous and carries a price.

The Continent of Terror:

Here we get to the meat of the setting, Zarth. This is a pretty straightforward section, including a chronology, map, and quick descriptions of the main nations/regions. "What the Elder Told Me" is a handy player reference for roleplaying a character from a given background. The write-ups deliberately reflect the bias of the given area, and are "spoiler-free." The secrets and such are reserved for the CK sections.

What I liked: The rules strike a nice balance between "old-school" freeform combats and little rules that add flavor. Having "player-safe" setting write-ups is a definite plus as well.

What I didn't like: While I like many of the setting ideas, I am still on the fence about whether to embrace the Zarth or strike out on my own. This isn't a reflection on the game itself, just my personal preferences.

Next up, we'll strike out into Crypt Keeper territory, so players beware!