This is the treasure section of the book. In addition to some straightforward advice about placement and appropriate reward levels, C&T also includes “trade-out” guidelines (similar to Swords & Wizardry). The idea here is that there is a chance for a given amount of the treasure’s “cash” actually being a special item like gems, jewels, or even magic.


The listed items are an excellent sampling of weird magics in a swords & sorcery world. Unlike other games, instead of being classified by type (scrolls, potions, rings, swords, etc.), the items are just listed as individual objects. This further underscores the idea that they should be considered individually instead of “just another magic __.”


A Compendium of Fiends:


Monsters, monsters. Where would we be without a bestiary? C&T delivers with a nice assortment of the weird, bestial, sinister, and deadly. Using a very “stat-lite” S&W style of listing, the monsters listed include only the numbers you need, and rely more on colorful flavor text to help the CK evoke the feel  of a creature. Many of the critters are “Zarthian” as opposed to your standard fantasy fare, and normal creatures (lions, tigers, and bears oh my) are a bit thin on the ground, but these are imported pretty easily from other rule books like Swords & Wizardry.


The end of the section includes tables and advice for creating or modifying monsters to create unique creatures in your game, along with a listing of monsters by challenge level. While I personally don’t use challenge levels in general, it’s a handy reference when looking for an easier or harder foe to include in your adventures.


The next section contains three adventures: The Halls of Nizar-Thun, The Haunted Lands, and Port Black Mire. While they all look eminently playable, they also serve as blueprints for C&T style adventures.  Found it very useful to look at how they differ from typical fantasy adventures as well as how they’re similar. “Halls” is a dungeon crawl, “Lands” provides some outdoor/wilderness adventuring, and “Port” is a city adventure complete with a random city events table. The adventures also provide some more detail to the setting (especially Port Black Mire).


Notes from the Abyss:
The final chapter self-described as “a miscellany of topics.” It includes CK (GM) advice do’s & don’ts, etc.), some fun tables for semi-random crypt (dungeon) creation, and a nice writeup on horror in gaming. It finishes up with a bibliography and suggested soundtracks (inspirational/thematic music).


What I liked: The treasure and monster sections were engagingly different than typical fantasy games. I particularly appreciated the nature of the magic items (magic with a cost).


What I didn’t like: As I’ve mentioned before, a lot of the material is tied pretty tightly to the default setting. That’s not a flaw, but it does feel limiting sometimes.


OVERALL: This is not a vanilla fantasy game. Crypts & Things is not a generic D&D substitute. It is designed to deliver a very particular theme and tone; one of weird magic, eldritch horror, gritty pulp action, and characters that you might find in the pages of Howard, Burroughs, or Smith.


The world of Zarth is a nearly ideal backdrop for such a game. With its ancient races, lurking terrors, and encroaching doom. For those who wish to play elsewhere, it shouldn’t be too difficult to use the game in your own setting, but it would be tough to leave all things zarthian behind.


I am immensely pleased with the return on my Kickstarter investment and am looking forward to actually playing some Crypts & Things very soon! 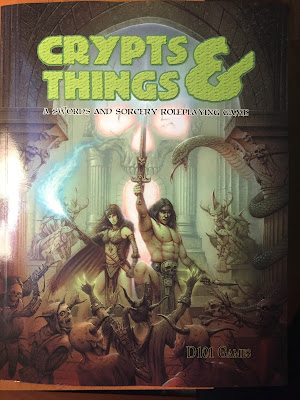